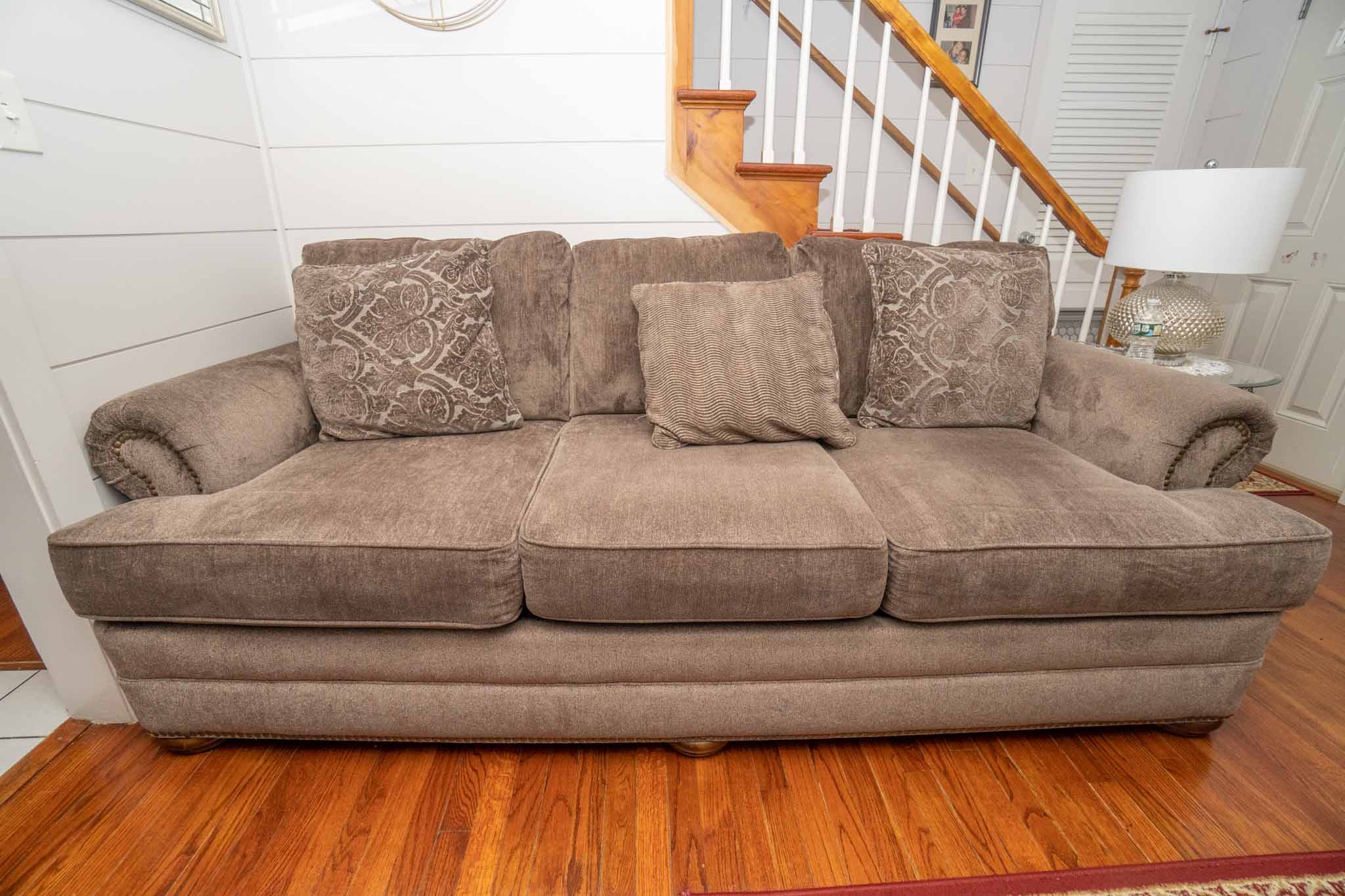 How to Get Slime Out Of Couch

Slime is a fun toy to play with, but if it gets on a suede or cloth couch, it can ruin it. Slime can be hard to get out with the wrong methods. Knowing how to get slime out of your couch before it dries is really important because this can save your couch.

When slime dries and is hard on a surface, it can leave a hard residue that will be rough on the skin. Do not worry because I will show you how to get slime out of your couch, whether it is dried up or still wet.

Here are 3 methods that you can choose from to remove slime from your couch if it is dried, wet, or even on a suede couch. Always clean your couch with precaution so that you do not damage it.

OTHER HELPFUL ARTICLES TO READ
How to Get Tar Off Shoes

How to Get Slime Out Of Couch With Rubbing Alcohol: Suede Couch

Rubbing alcohol is a versatile cleaning product that can do so many things, including removing anything that sticks to your couch. This could be stickers, grease, dirt, and so much more.

What You Will Need:

Step 1. Locate all the areas on your couch that have slime marks on it. This will ensure that you do not forget any areas when you finish cleaning one part.

Step 3. Once the time is up, use the button knife and gently scrape the slime off the couch in one direction. If there are large chunks of slime, pick them off with your fingers.

OTHER HELPFUL ARTICLES TO READ
How to Get Glitter Off Skin

Step 4. Some small pieces of slime will be remaining, so use the too brush along with some more rubbing alcohol and gently brush it out the couch. Once you have done that, use some warm water and wipe the area clean so that the suede material doesn’t get stiff.

How to Get Slime Out Of Couch With Ice Packs

This method might surprise you, but alike and cold temperatures do not go well together. You might be saying why don’t I just let it harden on its own. Well, the ice packs will break the slime apart and prevent it from sticking together or on anything.

What’s You Will Need:

Step 1. Locate all the areas on the couch with the slime on it. If there are large chunks of slime, pick them off with your fingers so it will be easier to remove with the ice pack. Let the small amount of slime stay back.

Step 2. Take a small to medium size zip lock bag and add 6-10 ice packs into it. You can make more ice packs if there are multiple spots of slime on your couch. Place the ice pack on the slime mark and let it sit for 10-15 minutes.

Step 3. Once the time is up, the slime should be hard or semi-hard. Take the butter knife and scars or the slime out of your couch gently until everything has come out.

Step 4. You now need to wipe the couch out with some clean, warm water. This is just to make sure the area where the lime was is fully clean, and no small particles are there hiding deep down in the fabric.

How to Get Slime Out Of Couch With Dawn Dish Soap

Dawn dish soap is an amazing cleaning product that can clean so many things, including your entire couch. Dawn dish soap can break down grease amazingly so it will work perfectly on a slime mark that’s on your couch. This method work for leather couch as well.

Step 1. Fill a cleaning container with hot or warm water and then add 3 tablespoons of dawn dish soap to the water. Mix it around properly and dip a microfiber cleaning cloth in it.

Step 2. Take the microfiber cloth and wipe the areas that have the slime mark on your couch. The warmness from the cloth will soften this line so that it can be wiped out easily.

Step 3. Do this onto the couch is clean, and all the slime is gone. if small particles of slime are remaining, you can actually pour some of the dish soap on the area and scrub it out with a cloth. Just make sure to clean out all the dish soap when you are done.

How to Get Slime Out Of Couch From Leather Couch

Removing slime from a leather couch is the easiest thing to do. All you need to do is take off any large chunks of slime that you can pick off and then use warm water and any soap and wipe the rest of the slime off the couch because the leather surface is smooth, the slime will slide right off without giving you any trouble at all.

How to Get Slime Out Of Cloth Couch

If you have a couch at home that has a cloth, material, and holes in it, then you will need a special method to get the slime out because the slime will get into the small holes in the couch. The method Below is the perfect method and will get it out perfectly..

What You Will Need:

Step 1. Take the butter knife and scrape off the majority of the slime off the surface of the couch. this will make it much easier for you to clean the slimes out of the small holes on your couch.

Step 2. Once you have gotten all of the slime off the surface of the couch, use it to brush and gently rush out all the slime that is stuck in the small holes of the couch. What works best is if you brush the area in a circular motion so that the small bristles on the toothbrush get into the small holes.

OTHER HELPFUL ARTICLES TO READ
How to Get A Bee Out Of Your House: 5 Natural Ways

Step 3. Once you have gotten all of the slimes out of the small holes, Just use a clean microfiber cloth with warm water and wipe that area of the couch clean.

How to get slime out of a blanket

How to get slime out of hair

When slime gets on your couch, you should immediately try to remove it with one of the methods above because if it dries and hardens, it will be so much harder to get. Choose carefully with the methods above so that you can get the slime out of your couch.

If you are trying to get the slime off a leather couch, do not use any oily substance, such as WD-40, because leather absorbs oil and it will ruin your couch. When your kids are playing with slime, please put them in an area so that slime doesn’t get near you. You’re clothes or another furniture is in the house.